R-S Theatrics presents the musical The Cherry Sisters Revisited June 6-16. “Based on the true story of The Cherry Sisters - a vaudeville act that gained fame and notoriety for being...awful. Why are the audition portions of American Idol the most watched? What does it say about our society that we are entertained by others' failures? And if you reached the height of your profession only to realize that you were only there as a joke - would you stay?” I'm probably not going to get to see this one because of prior commitments, a fact which I deeply regret. The story of the Cherry Sisters is one of those "truth is stranger than fiction" items from the heydey of American vaudeville. Performances take place at The Chapel, 6238 Alexander. For more information: r-stheatrics.com.

Upstream Theater presents An Iliad through Sunday. Performances take place at the Kranzberg Arts Center, 501 North Grand in Grand Center. "The inimitable Jerry Vogel returns to Upstream to play the poet who has come to enchant us, move us, and dare us to recognize ourselves as we peer into the bronze-tinged reflection of an ancient war...Featuring live music by longtime Upstream collaborator Farshid Soltanshahi." In his review for 88.1 KDHX, Steve Callahan describes it as "an evening you will never forget. Be prepared to weep." For more information, including show times: upstreamtheater.org.

Opera Theatre of St. Louis presents Puccini's Il Tabarro and Leoncavallo's I Pagliacci in rotating repertory with three other operas through June 29. Performances take place at the Loretto-Hilton Center at 135 Edgar Road on the Webster University campus. All performances are sung in English with projected English text. As I note in my review for 88.1 KDHX, this is "a dramatically powerful and musically impeccable combination of two classics of verismo opera." For more information, you may visit experienceopera.org or call 314-961-0644. 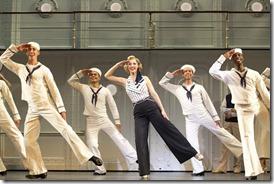 The Fox Theatre presents the Broadway revival of the classic Cole Porter musical Anything Goes through Sunday. This is the tour of the 2011 Roundabout Theatre revival and it's definitely a winner. You can see my review for 88.1 KDHX for details, but the main point is that you should get tickets immediately. The Fox Theatre is at 517 North Grand in Grand Center. For more information, call 314-534-1678. 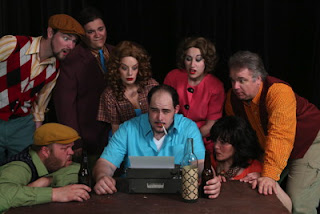 New Line Theatre presents the St. Louis premier of the musical Bukowsical Thursdays through Saturdays at 8 PM through June 22. "With book and lyrics by Spencer Green and Gary Stockdale, and music by Stockdale, Bukowsical is a wacky, high-energy – and gleefully adult – musical comedy, an ironic and insightful 21st-century reboot of the classic American musical comedy, exploring the intersection between sex, drugs, booze, and art, all through the life story of the great American novelist and poet Charles Bukowski." I haven't seen this, but the idea is so much in line with the mission of the Church of the SubGenius that it demands attention. "The show is, I think, ephemera," writes Steve Callahan in his review for 88.1 KDHX, "But it’s the sort of ephemera that a company like New Line should be doing. And they do it so very, very well!" Performances take place at the Washington University South Campus Theatre, 6501 Clayton Road. For more information, call 314-534-1111.

Circus Flora presents its new show, A Trip to the Moon through June 23 under the air-conditioned, red-and-white, big top tent in Grand Center next to Powell Hall. "Inspired by Georges Méliès' groundbreaking 1902 film, A Trip to the Moon, Circus Flora's creative team captures the film's imaginative spirit ...A Trip to the Moon borrows this iconic piece of cinematic history and Méliès' artistic instruments to construct the visual styling, costuming and narrative elements." For more inforamtion, visit circusflora.org.

Opera Theatre of St. Louis presents Gilbert and Sullivan's The Pirates of Penzance in rotating repertory with three other operas through June 29. Performances take place at the Loretto-Hilton Center at 135 Edgar Road on the Webster University campus. All performances are sung in English with projected English text. As I note in my review for 88.1 KDHX, this may not be a perfect production, but it's pretty darned good and well worth seeing. For more information, you may visit experienceopera.org or call 314-961-0644.

New Jewish Theater presents Shlemiel the First through Sunday. "A joyous klezmer musical based on the tale by Isaac Bashevis Singer, follows the naive beadle Shlemiel from Chelm, a village of fools, on a pilgrimage to spread the wisdom of the local sages. His simple-minded folly turns an already absurd world hilariously upside down, and the play’s small cast, complete with a live klezmer band and a topsy-turvy set, amasses large measures of adoration from audiences nationwide." I'm not sure I'm the right audience for this show—the material has no real cultural resonance for me—but there's no denying the quality of this production. The storybook set by Margery and Peter Spack and Cristie Johnston is also a triumph. Performances take place in the Marvin and Harlene Wool Studio Theater at the Jewish Community Center, 2 Millstone Campus Drive in Creve Coeur. For more information: www.newjewishtheatre.org or call 314-442-3283.