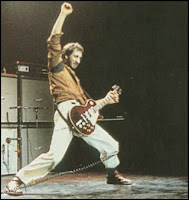 "Early British pop was helped tremendously by the writing of Bob Dylan who had proved you could write about political and quite controversial subjects. Certainly what we did followed on from what was happening with the angry young men in the theatre."

"What theatre started to look at much earlier than any other form was the internal operations of ordinary people, sometimes using mythic models in order to tell the story." - Pete Townshend

Yes, that Pete Townshend.  Who (ahem) knew?  The "angry young men" he's talking about are the mostly middle-class playwrights of the 1950s (John Osborne and Kingsley Amis, most prominently) who used their work to attack traditional English society.
Posted by Chuck Lavazzi at 12:49 PM