TPTBT (The Place to Be Tonight): Thursday, May 23 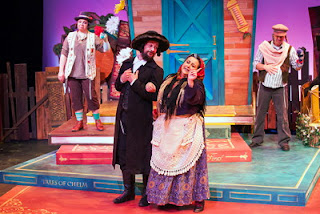 Who: New Jewish Theatre
What: Shlemiel the First
Where: The Marvin and Harlene Wool Studio Theater at the Jewish Community Center, 2 Millstone Campus Drive in Creve Coeur
When: Tonight at 7:30 PM through June 9th; see the web site for times.
Why: "A joyous klezmer musical based on the tale by Isaac Bashevis Singer, Shlemiel the First follows the naive beadle Shlemiel from Chelm, a village of fools, on a pilgrimage to spread the wisdom of the local sages. His simple-minded folly turns an already absurd world hilariously upside down, and the play’s small cast, complete with a live klezmer band and a topsy-turvy set, amasses large measures of adoration from audiences nationwide."  I just saw this last night and was tremendously impressed by the talent of the cast, the smart direction, simple but effective choreography, and fine work by Henry Palkes and his small combo (three pieces, counting him).  The combination of clarinet, violin, and keyboard does, in fact, have a distinctly klezmer-like sound and the Robert Brustein/Arnold Weinstein does a nice job of channeling klezmer and traditional Yiddish theater elements.

I'm not sure I'm the right audience for this show—the material has no real cultural resonance for me—but there's no denying the quality of this production.  The storybook set by Margery and Peter Spack and Cristie Johnston is also a triumph.

To paraphrase an old advertising slogan, you don't have to be Jewish to love Shlemiel.  But, as the old joke punchline goes, it couldn't hurt.
Posted by Chuck Lavazzi at 12:00 AM