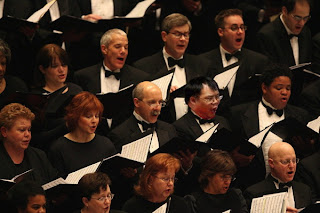 For the second week in a row, Maestro David Robertson has taken a well-known piece in the standard repertoire, plugged it into a high-voltage socket, and produced a performance that crackles with electricity.

Last week it was Schubert’s 1822 “Unfinished” symphony. This week it was a work composed around the same time—Beethoven’s Symphony No. 9 in D minor, Op. 125, a.k.a. the “Choral” symphony. Working without a score and conducting a chorus that was singing from memory, Mr. Robertson gave us a 9th that demanded attention from the first notes and didn’t let go until the final rousing chords. Like my personal favorite Beethoven 9th (the one with Roger Norrington and the London Classical Players), this was a performance that generated a tremendous amount of excitement. Yes, there were bits of ragged playing here and there, but only a few and not nearly enough to take away from the truly stunning impact of what Mr. Robertson, chorus director Amy Kaiser, and their forces accomplished here. The little burst of spontaneous applause that followed the first movement Thursday night (graciously acknowledged by Mr. Robertson) was an indication of how caught up the audience was.

Like many young vocal performers, the soloists for the Beethoven all had solid opera credentials; pure recitalists seem rather rare these days. From my point of view, that’s all to the good. Soprano Susanna Phillips, mezzo Kelley O'Connor, tenor Joseph Kaiser, and baritone Corey McKern all acted the text of the final movement as well as they sang it, and they sang it wonderfully. They were also more easily heard (at least from our seats in the Dress Circle) than vocal soloists sometimes are at Powell due, I expect, to their placement above and behind the orchestra rather than in front of it as is usually the case. My experience has been that the farther front soloists are, the harder they are to hear upstairs.

Those theatrical skills were put to good use in the first half of the program as well, which consisted of a brief Bruckner motet, Christus Factus Est, followed without pause by the grim and violent final act of Berg’s opera Wozzeck.

Although separated by only a little over thirty years, the Bruckner (from 1884) and Berg (composed between 1917 and 1922) are from radically different worlds. The Latin text for the former is about the exaltation of Christ while the German text for the latter, adapted by the composer from Georg Büchner’s unfinished tragedy from 1836-37, is about the debasement of the hapless titular army private. Bruckner’s glorious a cappella music—sung with tremendous power and beauty by the members of the Symphony Chorus—portrays Christ dying for humanity’s sins. Berg’s unsettling twelve-tone score employs a massive post-Wagnerian orchestra to accompany Wozzeck’s murder of his mistress Marie and his own accidental death (or maybe it’s suicide) while trying to cover up the crime.

The contrast between these two works could not be greater, but oddly enough they seemed to work as a dramatic whole.

The Wozzeck excerpt, in particular, was remarkably compelling, given that this was a semi-staged concert presentation of a work that is, to say the least, overtly theatrical. The various locations—Marie’s bedroom, a lake, and a rowdy tavern—were suggested with lighting, and the limited action took place on a small platform between the chorus and orchestra. The brief appearances by the Lieutenant (tenor Keith Boyer) and the Doctor (bass Mark Freiman) were pushed down to the aisle between the lip of the stage and the first row of seats, as was the final grim scene in which a group of children (members of the Children’s Chorus) tell Marie’s uncomprehending child that his mother is dead. It was all a bit awkward and should have made suspension of disbelief difficult, but Berg’s brilliantly evocative music made it effortless. It helped that Mr. McKern’s Wozzeck, Ms. Phillips’s Marie, and Ms. O’Connor’s Margret (Marie’s friend, who calls Wozzeck out for the blood on his hands) were so completely credible.

Mr. Robertson’s interpretation was wonderfully knowing and dramatic, and the members of the orchestra played with their usual consummate skill. That’s all the more impressive when you take into account that Berg’s score is not easy to navigate and not often heard locally. I don’t think the opera has ever been staged here, and the Symphony’s last concert performance was over forty years ago.

I’ve always felt a bit ambivalent about Wozzeck—attracted by the music, repelled by the story—but Thursday’s performance has got me thinking that one of our local opera companies might want to take a look at it. It might be a bit risky for Opera Theatre, but it might be right up Union Avenue’s alley.

These concerts concluded the regular season, but post-season action continues next week with The Music of Whitney Houston on Friday, May 17; a free Youth Orchestra Concert on Saturday, May 18; and a Tribute to Richard Hayman on Sunday, May 19. Every audience member at that last one gets a free harmonica to play along with the orchestra and harmonica player Mike Runyan.

Concerts in June include the 1812 Overture and Bolero on June 8 and a League of American Orchestras Conference Concert on June 18 featuring Sibelius’s Symphony No. 7 and John Adams’s "Doctor Atomic" Symphony. For ticket information: stlsymphony.org.

Finally, this postscript: this weekend’s concerts marked not only the end of the current season, but also the retirement of two highly respected Symphony musicians: harpist Frances Tietov and bass clarinet James Meyer. Mr. Robertson took a few moments at the beginning of the concert to honor both retirees, who received a warm round of applause from the audience.
Posted by Chuck Lavazzi at 12:00 AM