Who: Opera Theatre of St. Louis
What: Gilbert and Sullivan’s The Pirates of Penzance
Where: The Loretto-Hilton Center
When: through June 29th

Time was when St. Louis Savoyards could expect an annual Christmas present from Opera Theatre in the form of a Gilbert and Sullivan operetta presented at Washington University’s Edison Theatre. Alas, either the present proved too expensive or the school had other plans for the space. These days we have to be content with the occasional production as part of the regular season by Opera Theatre or one of our other local opera companies. 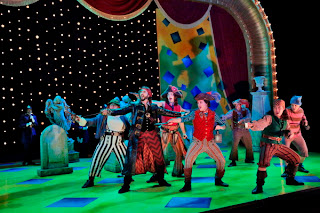 The Pirates of Penzance, the G and S classic that opens the current Opera Theatre season, was last produced as one of those Christmas presents in 1982. This new version, directed and choreographed by OTSL veteran Seán Curran, sometimes gilds the comic lily with excessive and occasionally distracting stage “busy-ness”, but on the whole it’s tremendous fun. The cast are all fine singers and actors, James Schuette’s colorful costumes and pop-up book set—complete with a gilt Victorian false proscenium and red velvet curtains—is a delight, and the orchestra under conductor Ryan McAdams sounds terrific.

The story of Pirates is so well known that you don’t need me to summarize it here. I’ll just note that it’s a typically Gilbertian mix of parody, paradox, and verbal wit that remains hilarious over 130 years after its simultaneous New York and London premieres (an arrangement made necessary by the requirements of British and American copyright law at the time).

Heading this first-rate cast are tenor Matthew Plenk as Frederic, the “slave of duty” of the opera’s subtitle, and soprano Deanna Breiwick (a fine Johanna in Sweeney Todd last season) as Major-General Stanley’s youngest daughter Mabel. Mr. Plenk’s robust voice is almost too big for the role—a fact that Mr. Curran uses for a great visual joke during “Oh, is there not one maiden breast”—but he makes it work. Ms. Breiwick’s seemingly effortless execution of the vocal filigree in “Poor wandering one”, meanwhile, demonstrates why the New York Times once called her a "vocal trapeze artist." And her comic acting skills are solid. 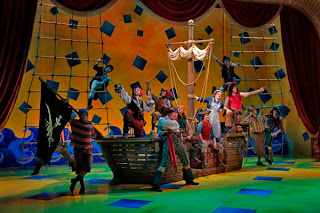 Bass Bradley Smoak once again demonstrates his own impressive vocal and comic abilities (previously only on display in OTSL’s Don Giovanni and Marriage of Figaro) as the Pirate King. Mezzo Maria Zifchak is equally fine as Ruth, “a pirate maid-of-all work.”

Bass-baritone Jason Eck is an excellent Sergeant of Police, although he seems not entirely comfortable with the very bottom notes in “When the felon’s not engaged.” Mezzos Jaime Korkos and Corrie Stallings and soprano Katrina Galka—all Gerdine Young Artists—all have moments to shine as Stanley daughters.

Baritone Hugh Russell, who was such a great Figaro in Barber of Seville seven years ago, shows the same vocal and acting skills in the “principal comedian” role of Major-General Stanley. He seemed to be having a bit of difficulty enunciating all the lyrics of "I am the very model of a modern Major-General" on opening night, but that’s a minor complaint.

Mr. Curran’s choreography, while not elaborate, makes all his performers look good—which is what great choreography should do. His direction is, as I mentioned before, sometimes a bit too busy for its own good but it mostly serves the material well. I will, however, confess to being annoyed that the overture was, for no discernable reason, cut in half. Sullivan’s overtures are mostly little gems, with Pirates being one of the best, and they deserve to be heard as intended. Just because Joseph Papp did it for his 1981 pop/rock adaptation of Pirates doesn’t necessarily make it a good idea.

Opera Theatre may not be presenting a perfect Pirates of Penzance, but it’s an awfully good one, my minor “quibble quaint” not withstanding. It’s well worth seeing and highly recommended. Performances continue through June 29th in rotating repertory with the rest of the OTSL season. For more information and schedules, experienceopera.org.
Posted by Chuck Lavazzi at 11:40 PM