The Cliburn Report 3: Trial by Jury 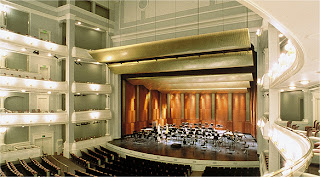 [I will be covering the final round of the Van Cliburn International Piano Competition in June for 88.1 KDHX. Meanwhile I’m picking highlights of the current press coverage for your dining and dancing pleasure.]

This is the second in the grueling seven-day marathon that is the preliminary round of the Cliburn competition. Each of the thirty contestants will perform two 45-minute recitals in front of a live audience in the 2,056-seat Bass Performance Hall, located in the city’s Modern Art Museum on Commerce Street, and for a world-wide audience via the Cliburn Foundation’s professionally-produced live webcast at cliburn.org.

The concerts start at 11:00 AM and run, with two 90-minute intermissions, until after 10 PM each day. It’s a killer schedule that reminds me of nothing so much as the old “continuous vaudeville” shows of a century ago.

For those of you who might not be familiar with the term (i.e. pretty much anyone who hasn’t made a study of the Vaudeville era), “continuous vaudeville” was an arrangement devised by producer Benjamin Franklin Keith in the early years of the 20th century whereby vaudeville theatres were kept open for twelve hours per day, with entertainment being offered continuously. The same bill of acts would cycle three of four times, with audience members coming and going at will. As Rick Easton notes in his on-line vaudeville history site, “[t]he continuous provided the illusion of a constant and thriving business, eliminating what Keith saw as ‘hesitancy’ on the part of patrons to enter the theatre until they were ‘reassured by numbers.’” It was a great deal for Keith; less so for his acts, who had time to do little else than perform and (maybe) sleep.

The Cliburn’s schedule may not be as punishing to performers as Keith’s was, but it seems to me that it must be every bit as hard on a group that’s equally as critical to the competition: the judges. They’re obliged to not just listen to almost eight hours of recitals per day but to listen attentively as well—a daunting task, to say the least. In his backstage look at the 1989 Cliburn, The Ivory Trade, Joseph Horowitz neatly summarizes the hazards of such a schedule: “Impressions, sharp at first, blur and refocus intermittently. The mind wanders. The ears tire.”

And yet listen they must, and with care. When the preliminary round is over, they’ll have to vote to advance twelve of the thirty contestants to the semifinals. If they take their jobs seriously (as I presume they must) they have to make sure that no nuance of any performance is missed. They need to feel confident that their twelve choices are, in fact, the best of the bunch.

I don’t envy them that task. Listening to some of the live webcast last night, I was struck by the stunningly high level of pianism on display. If asked to pick a “best” among the few I heard, I’d be hard pressed to do it with any degree of assurance. The members of this jury—headed by Fort Worth Symphony director emeritus John Giordano—have their work cut out for them.
Posted by Chuck Lavazzi at 11:18 AM