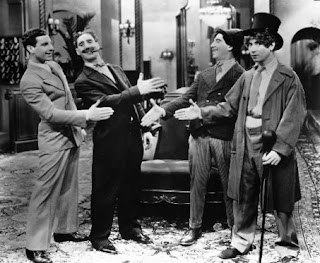 "Excuse me for interrupting, but I thought for a minute I actually heard a line I wrote." - George S. Kaufman, during a rehearsal of Animal Crackers with the Marx Brothers.

The Marxes were noted for changing lines and adding jokes at will. The film Animal Crackers started out life as a 1928 musical starring the Marx Brothers and Margaret Dumont. Animal Crackers opened on Broadway on October 23, 1928 at the 44th Street Theatre. It ran for 191 performances and then toured, giving the Marxes ample opportunity to fine tune their material before filming the show in 1930.
Posted by Chuck Lavazzi at 12:01 AM