TPTBT (The Place to Be Tonight): Wednesday, May 8 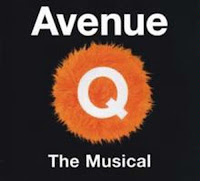 Who: Take Two Productions
What: Avenue Q the Musical
Where: Tower Grove Abby, 2336 Tennessee
When: Tonight through Saturday at 7:30 PM
Why:  As I noted in my 2008 review of the first tour of this show to hit St. Louis, this smart, hip, and very funny parody of Sesame Street, Avenue Q is also an entertaining (if R-rated) story of college-educated twentysomethings – both flesh and foam rubber - coming to grips with the economic, political and sexual facts of life. Their low-rent apartments are all on Avenue Q, in “an outer borough of New York City” that a sort of cross between the East Village and Brooklyn.

I haven't seen this production, but the show itself is pretty hilarious.  It's also definitely for adults.  "Due to adult language and situations (like full-puppet nudity)," the company web site advises,  "Avenue Q may be inappropriate for children under 16. Parents should use their discretion based on the maturity level of their children."

Proceeds from this show will benefit the Missouri Fire Service Funeral Assistance Team.
Posted by Chuck Lavazzi at 12:01 AM