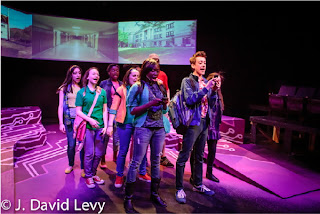 So here I am all cozy back home after the closing performance of Winning Juliet with Shakespeare Festival St. Louis. It was a good run; ten performance total, eight of which were morning shows for student audiences. The 8 AM call was a killer for someone like me who, in retirement from his day career in the tech biz, was used to getting up around 10, but it was worth it.

It was worth it for the talkbacks after each show, where we saw just how much the play’s anti-bulling message resonated with the kids in the audience (even if it did confirm all the worst suspicions the of the home-schooled kids about public schools).

It was worth it to see how articulate and insightful the comments from the kids in our cast were about the issues raised in the play and about their characters.

It was worth it to hear Dave Toretta’s catchy score and Chris Limber’s lyrics, parts of which I still can’t get out of my head. In particular, I keep hearing our cast harmonizing on “Between Us”: “You and I / Are just the same / We see beyond / The plots and games / Together / Between us / This hate that only / Hearts can mend / To share this hope / Will make a friend / Together / Between us.” I know a lot of adults who need to hear those sentiments more often. 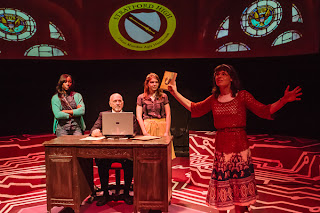 It was worth it for Chris Limber’s silly and energizing pre-show warm-ups, Emily Kohring’s spot-on direction, Melfreya Findley’s great choreography, David Blake’s sets and lighting, and Michael Perkins’s projections and videos, which added so much.

And, of course, Elizabeth Birkenmeier and Chris Limber’s wonderful script, with its ingenious weaving of an anti-bullying message, pitch-perfect contemporary teen speech, and Shakespearean in-jokes. Chris says he hopes it has a life beyond these performances and I agree. If it does, I hope I’m involved.

Congratulations to everyone. It was great working with all of you; one of the more pleasant theatrical experiences I’ve had. Yes, I know the cast were mostly teens still learning their craft, but their professionalism and commitment to the show were as good as (if not better than) that of any adult cast I’ve worked with. And, considering that I made my first stage appearance in 1962 (as a magician, just for the record), that covers a lot of territory.

We all made it work. Between us.
Posted by Chuck Lavazzi at 11:33 PM

Kudos to you and all involved in this production. We loved it. Thanks for sharing your notes.